For any of those trying to keep track . . .  here's an update on the kids' ages & stages, youngest to oldest:
1. The baby of the family turned twelve this summer and she is starting seventh grade next week. That's right, the BABY is in Junior High. (We don't actually call it that here but that makes it sound more dramatic, doesn't it?) She likes to spend her time perfecting her eye roll and finding new ways to bicker with me.
2. Youngest son (14)  just started his freshman year of High School.
He's excited about:
a. sports
b. meeting new people*
c. sports and
d. sports.
He's not excited about:
a. waking up early or
b. learning
*particularly upper classmen who already know him because he's a great athlete and the younger brother of a great athlete
3. Middlest (16) is embarking on his junior year of High School but he hasn't had to suffer the wrath of the early morning alarm clock yet. He's enrolled in the polytech culinary program in the mornings and regular classes in the afternoons. However, polytech doesn't start until next week so for now he doesn't have go to school until 11:30.
Things he doesn't realize about the culinary program:
a. Cooking is fun but this is still going to be school. And work.
b. I will expect him to cook at home more now.
4. Oldest son (20) has maintained his first really steady summer job and is gearing up for his junior year of college. Based on the sorts of pictures he texts me, I'm pretty sure he's been very much enjoying life on his own in a fun city with friends and some spending cash.
5. Oldest daughter (21) graduated college in the spring, which was only the end of her junior year. She didn't exactly mean to do that, it just happened. She secured a summer fellowship at the Andy Warhol Museum and she is proud (as are we!) that she's credited in the publicity info for the upcoming show. 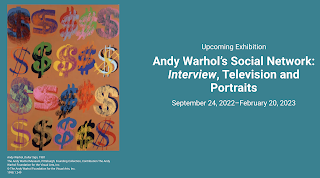