Five on Friday: I'm Sensing a Theme Here (Otherwise Entitled: I May Be Dancing on The Border of Creative & Crazy But at Least I'll Be Wearing the Plastic Halloween Costume of My 1980s Dreams)

Octobers in the late 1970s & early 80s: I give up on asking my mother to buy me one of those god-awful plastic Halloween costumes because I know she won't buy one. She'll insist on some sort of amazing hand-sewn costume like a genie or a pirate or a dancing bear from the circus. Ugh, Moms!
1982: The height of ET insanity. I remember the line wrapping around the single-screen movie theatre that no longer exists and actually seeing this movie with my whole family in the movie theatre (a rare occurrence in my childhood).
Early October 2021: While visiting my college students, I go to a flea market and find the plastic ET costume of my elementary school dreams. I love it but do I really want it? "Oh come on," says the seller, "It's only $5." Considering the original 1982 price tag says it cost $4.88, I figure 12 cents inflation after thirty-nine years is not bad at all! I buy it.
Slightly later in early October 2021: Now I am home and I own a plastic ET costume from 1982 that smells like someone's basement. What am I going to do with this thing, I wonder, as I find myself giggling alone in the kitchen altering a book for a man I've never met before and wondering about my sanity. 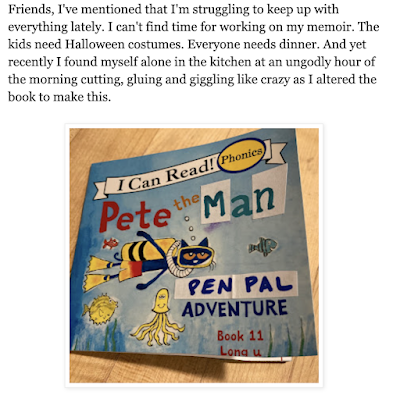 . . . and during this aforementioned process of giggling and sanity contemplating, I realize what I must do with this costume: I must alter it so I can wear it. I will finally have the terrible plastic Halloween costume of my dreams.
Do I have any parties or other Halloween plans that would require a costume? No. Did that stop me from pursuing this insane goal? Also no.
I would like to present some highlights of my 1982 meets 2021 Plastic ET Halloween costume along with the question: am I super creative or insane? Either way, I hope you enjoy:
1.  The top. First of all, what the hell is this supposed to be? Am I being ET or am I being ET wearing a picture of himself? Why doesn't the costume look like his body? God, did I really pine for one of these things?? It's awful! But I MUST wear it and celebrate its cheesiness. So instead of trying to make the shirt any more comfortable and . . . attractive? . . . I made it as boxy, cheesy and oversized as possible. Also I guess it's more of a smock than a shirt now. So be it. 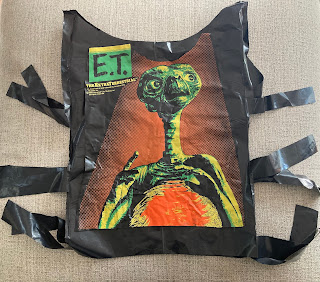 2. The pants, which were attached to the shirt, were not going to fit me at all. So with the back of the shirt I cut off, both sides/legs of the pants and one little tiny section of black plastic bag, I created a plastic skirt!

3. The mask was in pretty good shape, just needed a little tape in one spot and some new elastic. Easy-peasy. 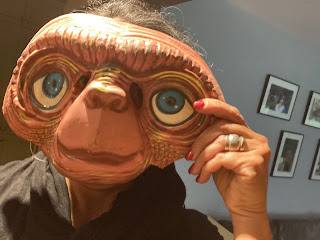 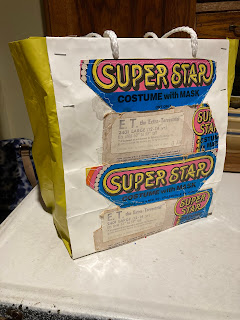 4. The box was not in perfect condition but had some really amazing aspects, like being SUPERSTAR brand and oddly calling its contents "flame retarded" instead of "flame retardant." Maybe this is also grammatically acceptable (????) but I have never seen this before.
(It also said "DO NOT WASH. Washing removes flame retardancy." But it smelled really bad. I soaked it in soapy water and hung it outside to dry.)

With the box being so . . . unique . . . I really wanted to incorporate it into the costume somehow. Also I am sort of obsessed with the idea of sewing paper, so I sewed the box pieces to a paper bag for my treat bag. Again: I have no plans but surely someone, somewhere will want to give me treats for my efforts. 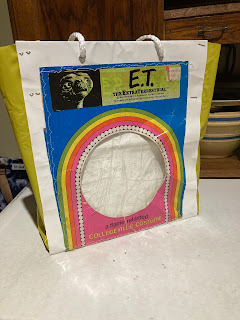 5. I wondered if I should put a picture of my own face in the spot where the mask would have shown through? My husband said, "Duh, make it your face peeking out of a pile of stuffed animals," (and idea that made me squeal with joy, which made him add: "This is why you should always ask me first," which made me start to wonder a little if he is also a little creative-crazy.)
I started thinking about how I'd be able to take a selfie once I was hidden in some stuffed animals and thought it might be easier just to superimpose my face into an existing image. I searched for a picture of the scene of ET hiding in the stuffed animals and instead came across a photo of a WHOLE BUNCH OF ET STUFFED ANIMALS. I text-nagged my alleged adult until she woke up and did some magic for me, and I already know she has the creative-crazy from me (us?). She woke up and did not disappoint.
Hope you're not too jealous! Stay tuned for updates on how many treats I get.
Posted by Sister Serendip
Email ThisBlogThis!Share to TwitterShare to FacebookShare to Pinterest
Labels: Five on Friday, holiday