One time my Mother, who raised four children of her own, asked me what all five of mine liked to eat. She's almost as funny as my kids.

The best answer I could come up with was "Cheese, I guess, but one of them says he only likes it when it's melted."

As the years have gone by, the kids have continued to finely tune their widely varying preferences but my youngest has some of the most extreme examples that extend well beyond food. Lately she's been telling me about a lot of things she doesn't like. A couple of them are long-held beliefs but she adds new ones all the time, just to keep me on my toes!

1. I make a lot of soup this time of year and I've noticed that when I do, she ignores the ladle that is out and instead serves herself dinner with a large slotted spoon. 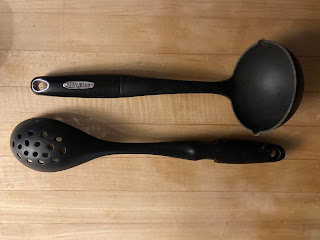 "What on Earth are you doing?"

"Soup juice is gross. I use this spoon so I fill my bowl with the stuff but not the soup juice."

2. She has always had an intense hatred of tights. She won't even try them on.

3. While she's always despised tights, she would always wear leggings. And socks. No more! Now she tells me, "Socks are weird, I just can't wear them." Super.

4. Here's another recently debut: "I don't like cardigans because they are basically just tights for my arms."

5. I was lacking a fifth item for this list so decided to ask some questions. Hilarity ensued:

(I remembered all the times I'd have a purse overloaded with snacks and sippy cups, three shopping bags and a four-year-old hanging off of my arms while keeping an eye on the six-year-old and hoping the ten and twelve-year-olds were still safe outside the public restroom door as I'd be trying to hold the surprisingly heavy and squirmy two-year-old up up to the sink, urging her to please hurry up and she'd squirt the soap out and then very quickly bring her little hands to her face so she could get a whiff of that fine generic pink public restroom soap instead of just quickly washing her hands as I had requested.)

"Yes, you sure have always liked to sniff soap," I agreed. "Why?"

She continued, "Besides, soap and candles are the same thing . . . scientifically."