The fourth grade family tree project can be tricky. Not for our first two kids, but they are ours biologically and so this sort of project was designed with them in mind.

Our next two kids are adopted. As much as I wanted them to represent both of their families, I gave them the choice on how to complete it. E, who is older, chose to only represent his adoptive family on his tree. Z, who is younger, always does what his older brother does (even though he will strongly deny that). I'll admit I was a little disappointed but I respected their decisions.

Now our youngest child is in fourth grade and immediately announced that she wanted to include both of her families. I was thrilled but also had no idea how we were going to do it. Once again, I followed my child's lead and am so glad I did.

Here are some highlights and grats from working on this project with her:

1. I am so thankful to her teacher! The first part of this project involved writing down where my child's ancestors came from. When I reached out to her teacher to discuss this, I learned that she had already read a book and had discussions with the class on all of the ways our country was populated that included Native residents, immigration and slavery.

2. This teacher has had students with blended families create unique trees before but never had an adopted student who wanted to represent both of their families. I am further thankful to her teacher for being very receptive to letting our daughter take the lead on how to approach this.

3. The way she tackled it was completely unique, just like her and her families. Two families deserve two trees. I asked what about her and her two older brothers who are a part of both families? How would they be represented? They would be gold leaves that touched both trees.

4. I found myself once again extremely grateful for our relationships with birth family that made asking for more names and information much easier.

5. The final result: not a family tree but a Family Forest. She felt so proud of it that she asked me to not post on Facebook until she handed it in . . . she was convinced a classmate would see it and steal her ideas! 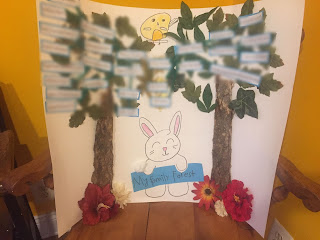