Five on Friday: These Kids & Their Weird Eating Habits

One time my Mom was going to watch my kids for a few days and wanted to know what they all liked to eat . . . now you know where I get my amazing sense of humor from. Good one, Mom!

Of course they were younger and pickier then, but there is still very little that all five would agree on for a meal. They've also hung onto a few interesting eating habits like:

1. G, at 17 years of age, maintains that he only likes cheese if it's melted.

2. This little gal really wants to gross out her siblings by insisting that she likes food that they all find disgusting . . . but after a bite or two she realizes that she doesn't really like it either.

3. E says he hates peanut butter and sometimes tries to claim he is actually allergic to peanut butter . . . eats the power balls and Elvis muffins I make and also occasionally enjoys candy that has peanut butter in it.

4. B is a college freshman and is always having lunches that look like this: 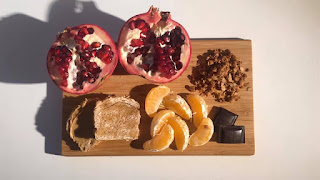 5.  So this is a brand new one and maybe the weirdest. Yesterday Z was making himself a peanut butter and jelly sandwich. There was no more strawberry jelly in the fridge so I told him to look in the cabinet where he did find a jar. I then apparently made a terrible mistake by asking, "Do you need help opening that jam?"

Then, even though:
a. Jam and jelly are essentially the same thing
b. "Jam" is just the word that came out of my mouth and was not indicative of what was actually in the jar
c. The label itself did not say "jam" OR "jelly" but "fruit spread"

. . . my child put the peanut butter away and made himself a ham and salami sandwich instead.