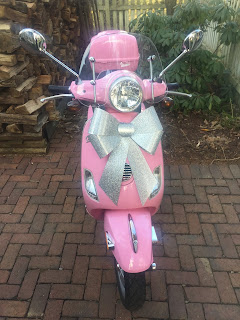 My husband has probably asked me once a year for the past several years, "Would you still ever want a Vespa some day?" and I am pretty sure I answered, "I think that ship has sailed" a few times in a row now.

So naturally he bought me a Vespa for Christmas. Which is amazing and generous and fun but, really, I wasn't so sure about the whole thing. First of all, I did that "get your motorcycle license in a weekend" course nineteen years ago and then hadn't driven a motorcycle since. I kept renewing that little M on my driver's license because it's cheap and why not? But I hadn't actually used it.

As I suspected, I was a bit timid on it at first, circling our neighborhood at 15 miles per hour and hoping to work myself up to slightly longer and faster rides. Early spring was kind of chilly, then it was really wet, then we went on a three-week vacation, so I hadn't gotten a lot of consisting riding in until recently.

Now I'm happy to report that I've been getting more comfortable driving Giacomo Prima Né (that's his whole name; I mainly refer to him just as Giacomo.)

It took me a little while to really get over most of my old-lady-scaredy-pants-ness. I still don't like hills or sharp curves which is unfortunate since where we live is surrounded by roads that are both hilly and curvy, frequently at the same time (so fun!)

But now that I'm driving him several times a week, I've made several realizations:

2. Pink Vespas get a lot of attention. I've caught two people taking pics and I get a lot of smiles and waves. 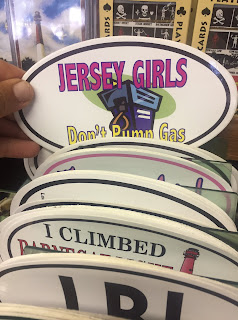 The state of Oregon now allows pumping your own gas in certain circumstances but in New Jersey it is illegal across the board--or is it? Motorcyclists always pump their own gas. I decided to dig around on the Internet and see if that was a legal exception or just how it's done. An official-looking website only told me this:

So I think it's just how it's done.

But seeing as how I'm a Jersey Girl I don't have much experience using a gas pump. Luckily the two young guys at the gas station were super into the Vespa, cracked up at the "No Pets" sign (found in the under-seat storage which is exposed to reach the gas tank), were happy to help me and truly didn't seem to care when I spilled a little gas on the ground. "That happens all the time."

4. Squirrels, chipmunks and deer are scared of Giacomo's ridiculous and completely non-threatening beep which is great since those animals are now my enemies. I had the opportunity to see if a large black bear would also be scared but I decided I'd just drive a different way instead . . . just in case.

5. My interest in studying Italian has been renewed.

*My other vehicles are named Overkill Jones and John Stamos. For the Vespa, I was initially torn between the names Giacomo and Louis Prima. I decided that as much as I enjoy Louis Prima's music, Giacomo would be a better name. I'd name him Giacomo Fee Na-Né to mimic the lyrics of that song by the Dixie Cups. But then my daughter pointed out we could swap out "Fee Na" for "Prima" and so really what I'm saying here is that she's a total weirdo, too. I think she gets it from her father.
Posted by Sister Serendip
Email ThisBlogThis!Share to TwitterShare to FacebookShare to Pinterest
Labels: Five on Friday, summer, Vespa