School's out for summer!

This should be such an exciting time, filled with so much promise of fun and magical adventures . . . but many of the social media posts I'm seeing lately are from friends dreading the screen time battle with their kids. One asked other parents recently, "So what's our game plan?"

Which is true actually, but I do have some other tricks up my sleeve. Here are my top five tips for keeping kids from too much screen time this summer:

1. Grow up with a parent that doesn't allow much television watching and was constantly telling you to go outside, like I did.

*Okay, fine, maybe it's too late for you to do that but I'm including it anyway so YOU can be that parent for your kids. Because I was that kid and even though I still don't know so many television and movie references from the 80s, I also just have it ingrained in me that kids belong outside as much as possible and not behind a screen.

2. Use the kids' screen time to your own benefit. Need small kids entertained or slightly older kids not fighting so you can nap or shower or exercise? When they ask for screen time, I make them wait and I tell them they are going to get it when I am ready to do that task.

*Added bonus: all summer long my kids inadvertently motivate me to exercise by asking, "Are you going to exercise now, Mom? Now? Mom? Exercise???" 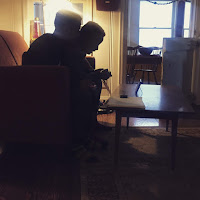 3. Work together on a list of non-screen-time activities to do--not outings you have to pay for, but simple fun things like painting rocks, setting up scavenger hunts for each other, water balloon fights, making a lemonade stand, etc. How many times do we get to the end of the summer and realize we didn't do some of these classic summertime things? We like to write the ideas on little scraps of paper and then put them in a container so we can pull one out and be surprised.

4. When they ask for screen time, direct them to that list they made.  If they say they don't want to, I'M SURE THERE IS A TOILET AROUND HERE THAT NEEDS SCRUBBING.