In last week's list I told you that I never pick favorites. I just start to get worried about the implications involved--like, if I picked an Otis Redding song as my favorite song, would that make me have to automatically pick Otis as my favorite singer? I love him and all but I'm not sure I'm ready to commit to that. If I pick a favorite color, would everyone always buy me things in that color until I was totally sick of it? I refuse!

I also told you that I wasn't going to try to pick favorite responses to my video. But so many of them have been so heartwarming, so special, so unbelievable, I just need to share them with you. So I lied. I'm picking favorites.*

1. #FartAt440 is really the gift that keeps on giving. My kids think it's hysterical. My Sister-in-law came up with the hashtag. People are saying things like: "I was watching this with no sound as to not wake my husband. Had to turn sound on to listen for the fart, then I laughed so hard it woke him up." 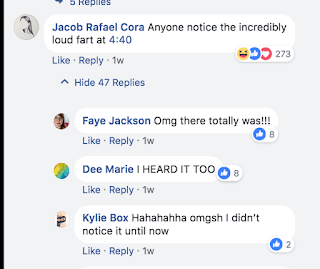 2. As a person who enjoys cursing, any comment that drops the F-bomb makes the cut, like:   "Beautiful, just fucking beautiful" and "Fucking impactful."

3. When I was small I thought I'd probably be an actress--maybe on Broadway! Of course the best review a Broadway show could get was "It made me laugh, it made me cry, I want to see it again and again!"
I changed my mind about Broadway a long time ago but still always loved performing. I did get to perform on a New York City stage the first time I told this story. Now that it's being shared people have been referring to me as a comedienne (me?!?!) as well as saying things like "Good lord. You’d think I was pregnant the way this made me cry" Some people besides my Mom and husband have even watched it multiple times! Who needs Broadway?

4. It's being shared by so many people around the world--12K and counting. That's absolutely mind-boggling and I wish I could  thank every single one of them. I'm especially thankful for the many Adult Adoptee, Parenting, Foster Parent and Adoption pages that are sharing it. Some are adding it to their Foster Parent Training Classes.

But if I had to pick a very favorite page that shared my video, it would be this one: Ison Glasgow, Swedish Hip Hop and things that interest him. You should probably go follow his page now. I did.

5. While I may not ever pick an absolute favorite response, this last one holds a really special place in my heart. It started with a friend of mine sharing that her sister, who doesn't know me, shared my video. My friend pointed out the connection in her status. Then sister chimed in: "I got  in trouble at the airport because I was listening to it so loud (at 4:30 am) because I don’t have earphones and I’m a rude jerk, but then the guy who asked me to quiet it down started listening and then he asked me to make it louder and we were both tearing up!"

I know it's corny but I honestly feel that every single one of your comments and messages is my favorite (Shh, don't tell your brother). They're filling me with so much hope and love. Thank you.

*I may have picked five today but I reserve the right constantly edit this list.