Five on Friday: What Were You Wearing Exhibit Opening

When it happened to Me, too . . . I had some trepidation about telling the Police Officers what I was—or wasn’t—wearing. Because just as I knew that I had every right to be naked in my own bedroom on a hot August night, I also knew that survivors are frequently blamed for their own assaults because of what they were, or weren't, wearing.

They never blamed me.

I knew that made me a lucky one, the exception, and as such I’ve always felt a responsibility to speak out on behalf of the others. When I read about the “What WereYou Wearing: Survivor Art Exhibit” at the University of Kansas, I knew I wanted to recreate it in my own community.

With the financial support and donations from many friends, acquaintances and local businesses (including a compassionate cashier at the Salvation Army) my dream began coming to fruition. Ironing, arranging, stapling and translating of signs into Spanish was done by members of the cast. Without their help, this exhibit would not be possible.

As we worked on each story, we never lost sight of the fact that a real person was behind the words and the clothing. The work was emotionally exhausting. I began having nightmares. But we continued, humbled that they would trust us with their words.

Last Friday night we opened our exhibit to the public. After giving them time to peruse the gallery, we performed an original, interactive theatrical piece  that was collaboratively written by our outside and inside (incarcerated) casts. It ended with an open letter entitled "Dear Patriarchy" and audience members were invited to write their own letters to possibly be included in a future show. 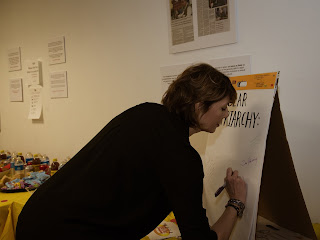 Overall, it was a tremendous success. Here are the top five highlights of the night for today's Five on Friday list:

1. I finally came up with an analogy for how I manage to have time to be so involved in this Social Justice Theatre Troupe when a friend asked me before the show. You know that fable about the frog and the boiling water? Okay, maybe that doesn't conjure up the most positive image, but it's the same idea. If I had tried to get involved at this point, when our Troupe is so active, it'd be like trying to jump into a pot of boiling water. I don't think I could do it. But I was in from the beginning when the pot was cold--so here I am, and tremendously proud, too.

2. Logistically it made sense for my teens to come to the show and my husband to stay home with the younger kids (he'll come to our next performance at the end of the month). I wanted the teens there to help and participate. They did, though my daughter was front and center during the show and my son was a little . . . less obvious in the back. I was glad to have them both there and they were both definitely helpful.

3. On the way home I asked my son what he thought. Not much for heavy discussion, he tried to get away with one-word answers until I told him he'd have to give me some more, like did he learn anything? His answer included, " . . . I learned more about things that have happened to people in Meta but I  feel like I was raised pretty well so, not really" which of course made me feel good as a parent. 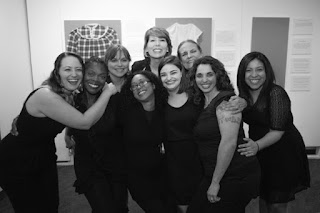 4. This (Bandaged heart that can still soar=my symbol for being a survivor of sexual assault) was waiting for me on my nightstand when I went to bed, made by my daughter: 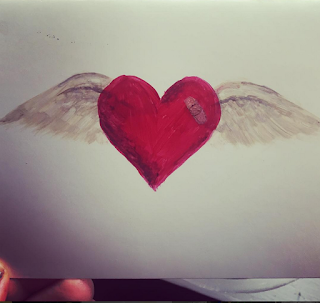 5. We had great feedback from the crowd, student filmmakers interviewing us for their documentary on social justice, a professional photographer (credit to all the pics in this post except the heart above: L.D. Bright Photography) and a great show. Not only that, but the exhibit will be up all month and we get to perform again on the 28th (locals, hit me up if you need details!) 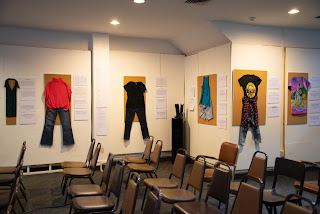