Five on Friday: The Good, The Bad, The Ridiculous: Road Trip '17

We survived our longest, most ambitious, most memorable family road trip ever. We hit huge tourist attractions like the Rock and Roll Hall of Fame, the Gateway Arch, the National Civil Rights Museum and Gracleand. We also went to smaller, lesser-known attractions like a random field of giant concrete ears of corn, the Krema Nut Company, a hole-in-the-wall BBQ joint and the Unclaimed Baggage store. We saw natural wonders like the Mississippi River, the Smoky Mountains and the solar eclipse in totality. 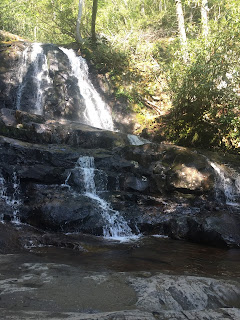 With all that we saw and did, how on Earth can I tell you all about it or even attempt to pick a favorite? I won't even try. Instead, I'm going to dedicate this Five on Friday to listing my top five picks of the good, the bad and the ridiculous of our adventurous journey.

1. The Good: Oh man. Wasn't it supposed to be easier listing it out this way? Maybe I'll start with the Bad to get it over with.

1. The Bad: We camped on three separate nights. The first night there were thunderstorms and the tent leaked. The second night of camping we had electricity right at the site so we decided to use the air mattress but then it leaked. I could tell you about our third night but that one was great so I can't talk about it here.

2. The Good: Okay, fine, now I have to tell you that our third night of camping was great. Warm, dry, comfortable. Another good thing? Airbnb refunded me $50 because I was super unhappy with one of our rentals (and I'm really not that particular, so you know it was bad).

3. The Ridiculous: Five kids in a van for hours with (not) only markers and their imaginations to entertain them leads to conversations like this:
Me, to 7-year-old: What did you write on your leg under those scribbles?
Bob . . . wait, what?? Bob Seger??
Her: G (15-year-old brother) did it to me but I didn't like so I crossed it out.
Me: Bob Seger, G?? Really???
(days later . . . )
16-year-old B: I gave (9-year-old) Z a "Kenny Loggins Seal of Approval" tattoo on his leg. It's in response to the Bob Seger one.


4. The Good: There was so much good. Kind strangers when I had trepidation about driving through the South with my transracial family and really needed kindness. Visiting friends, kids playing, fascinating museums, swimming with my family.

Oh!! And I am sort of obsessed with funiculars and try to ride one on every big family vacation. We rode our steepest, longest one yet in Chattanooga!

But I'd say the very best thing about the trip had to be seeing the solar eclipse in totality. I'm not a science or astrology geek. I wasn't honestly hyped about it, I thought it would be pretty cool, I guess. But when the moment came, I surprisingly got a little choked up from witnessing such an unusual and seemingly magical natural phenomena. I kept wanting to tell the kids, "this was a once in a lifetime chance!!" but apparently it'll happen again in the States in another seven years. I predict another road trip to see it that year . . . 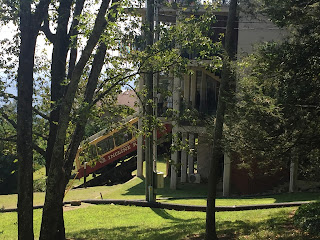 5. The Ridiculous: We traveled in one vehicle with five children through twelve states over eleven days and drove almost 3,000 miles and on the drive home we agreed that we all still liked each other.