I suggest cuing up this opera song for reading this post. Like me, you've probably heard this one before, it's one of those songs that's been used in commercials for Italian food and in cartoons.  And maybe like me, you'll not have realized that they are singing about FUNICULARS, which are a growing obsession of mine.

What is a funicular? Also known by a more boring name (an inclined plane) it's sort of a sideways elevator that goes up and down a steep hill. I encountered my first on a trip to Puerto Rico a decade ago. We were staying at a hotel that was on a hill top while the beach was at the bottom.  We were told to take the funicular down and had no idea what that meant. We saw it for ourselves and began calling it a Wonka-vator.

I hadn't been on another one until last year in Quebec, but on this year's road trip we got to go on THREE! It's become sort of a challenge now, to go on as many as I can.

So for today's late Five on Friday list, I present to you each of the five funiculars I've been on.

1. The Wonka-vator. Nothing particularly charming about it but as my first, it will always be special. 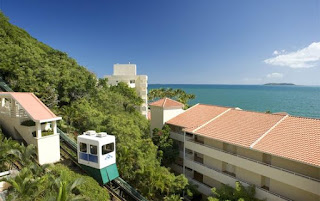 2. Quebec. Charming because it's in French and all. 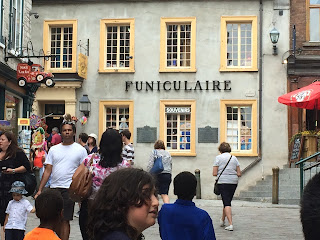 3. Pittsburgh, on the way up: all the charm of an antique railroad car (because it sort of is. Just . . . sideways.) Look at that lantern hanging from the ceiling! Squeal! 4. Pittsburgh, on the way down: this car was divided into three sections. I didn't get a good picture to explain what I mean, so here's a random picture from the Internet: 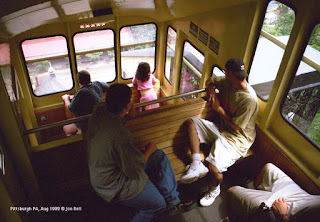 5. Lastly, one I was really excited about: a VEHICULAR one in Johnstown, PA. Naturally I prefer the word "funicular" in all cases, but when it's a vehicular one, it really should be called a funicular, right? A vehicular funicular? Oh well. Our brand new mega-van, Overkill Jones, seemed like it would fit but they didn't want to take the chance on its weight. We understood and just stood for the ride up and down. They called the little room on the right the "chicken room" for anyone not brave enough to stand by the gate and watch. My oldest son started out there but then even he realized it wasn't that scary and joined the rest of us by the gate. 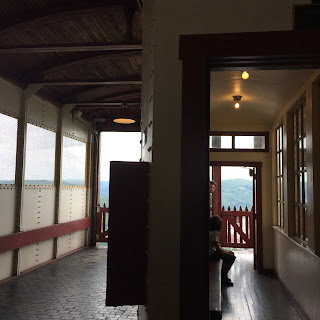 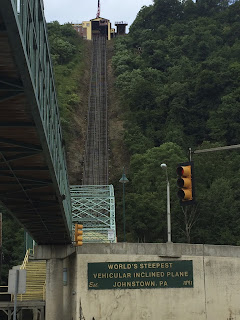 We're already scheming for next year's road trip in Overkill Jones and hitting another funicular. I'll be singing opera until then . . .