We're big on the road trip (see also: recent purchase of gigantic vehicle). Each year I try to figure out what will entertain my kids on long stretches of road. Of course they just want to play on electronics and they do that, too, but not for hours at a time.

We've got some rules. We try to avoid giving them anything to play with or read for the first hour of any ride. I mean, we drive an hour to get places pretty regularly without any toys, so they can do absolutely do it.

I also keep some toys hidden and wait until later in the trip to break them out. Here are this year's hits and misses for keeping them happy in the car, luckily they were mostly hits:

1. Smarty pants flashcards. Yeah, yeah, I know, boring. But sometimes they like this sort of stuff! Not this time. MISS. 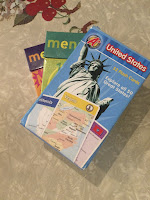 2. Pipe cleaners. I saved these until one of the last days of the trip. They were adequately bored enough to all try, even my 8-year-old who initially gave them a huge eyeroll. Half an hour later he was decked out in all sorts of pipe cleaner crowns and jewelry, announcing that he wants pipe cleaners for Christmas. HIT! 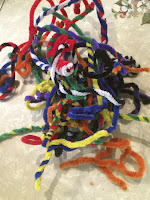 3. Activity books, Mad libs, notebooks and pens: most of the kids have outgrown this sort of stuff. Mad Libs were too hard in our new giant van we couldn't hear each other (seriously. Holy crap.) Plain paper was good for some kids but not all and was particularly good for my 10-year-old who began writing down all the different states he saw represented on license plates. HIT and MISS! 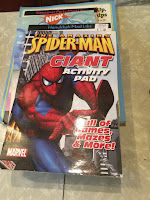 4.Water weenies. Not exactly a great car toy (or even a great toy, really, I mean, what are you supposed to do with them?) but they were super cheap so I picked them up before the trip. I saved these until one of the last days, too, and the novelty was enough to keep them entertained for a bit. Not as long as I'd have liked, but the weenie jokes alone made them worth it, because we're immature like that. HIT! 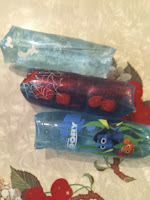 5. Okay I'm sort of cheating here, this wasn't for the car but worked out so well I have to share. I picked these up because they were super cheap and thought the kids would have fun with them. These were great to travel with because when you're small and in a strange room, a little hand held night light is wonderful. Also one of the rooms they stayed in was pretty hot, so a handheld fan was helpful. Best of all though? My younger kids held these and watched the lighted up fan blades spin around until they mesmerized themselves right to sleep. HIT!!! 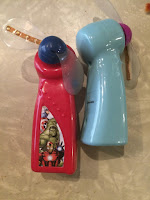