Five on Friday: Finally Figured Out What This Thing From IA Is!

A phrase that really ages me is, "One time in IA . . .  " (IA=Industrial Arts, more commonly known as wood shop.)
They don't really do middle school wood shop around here anymore. Nor have they for quite awhile, so the idea is very foreign to my children. If I do somehow refer to IA to them, I then further horrify them by reminiscing about how the Ethel Hoppock Middle School playground primarily consisted of a large cement pipe, surely leftover from some local road construction, that was painted by kids. It was taking the 70s environmental movement's idea of repurposing old tires as playground equipment to its pinnacle.
But I digress.
So how would IA even ever come up in conversation? Let me tell you a little story in five parts . . .
1. One time, as an adult, I was shopping at the church basement thrift shop near my parents' home (where I grew up). I found this . . . thing. 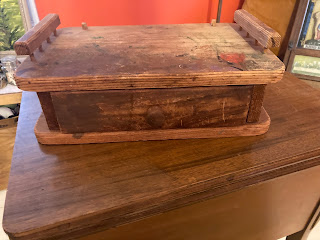 2. Even thought I wasn't sure what exactly this . . . thing . . . was, I thought it looked oddly familiar. I picked it up, turned it over and nearly died of embarrassment.
3. Oh right! This was a . . . well, I still don't know what to call it. It was a thing to sit on top of your dresser and hold stuff. A catch-all I guess? They couldn't call it a jewelry box or the boys wouldn't like it. It definitely had another part that was now missing but I don't know what it was.
Of course I had to purchase it and bring it home. I didn't want it per se but COME ON.  I could not leave JAMMIN' GINA there for someone else to see! (In case you were wondering, Mom swears she doesn't know how it got there. Must have been when Dad just scooped up a bunch of stuff from the basement and dropped it off.)
But what to do with it? My youngest daughter thought it could be a dresser for doll clothes but it never really worked out the way she wanted it to.
4. With no purpose, it ended up just sitting in our oldest daughter's primarily unused bedroom, where I recently set myself up for a zoom call. I needed something to prop my laptop up on, looked around and realized . . .
5. Not only does it fit perfectly, it also has:

So maybe it was weird as a non-jewelry-box-catchall and didn't work as doll dresser.  Could  Mr. Randall have somehow predicted a future need for this object? Or maybe . . . just maybe . . . Ethel Hoppock Middle School's 70s spirit of repurposing really influenced me.
Posted by Sister Serendip
Email ThisBlogThis!Share to TwitterShare to FacebookShare to Pinterest
Labels: Five on Friday