Life with an open adoption frequently means that the mundane and profound are entwined. An example would be the family party we went to last weekend. While there's nothing unusual about a family going to a  Sweet Sixteen celebration it was actually rather remarkable: it was in honor of my adopted children's biological sister. When I remember the years of not knowing if my kids would ever even be able to have a photograph of any of their biological family members, I realize just how extraordinary us going to that party was. Here are some observations from a lovely evening:
1. I had to work before the party and left instructions for the kids to please write something thoughtful in the card for their sister. This is what they came up with: 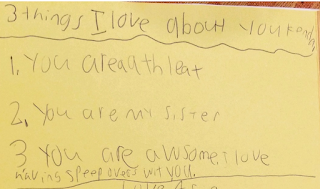 2. Once again I was struck by how inadequate the English language is in describing families like ours. I was dreading being asked how I was related to the Birthday Girl, since there is not a simple word to explain it. (Turns out at this point everyone pretty much knows who I am though, because nobody asked!)
3.  My youngest daughter took a few minutes to warm up but then we didn't see her all evening as she had become the constant shadow to the cool older sister she doesn't live with.

4. The Birthday Girl decided on her own to hold a candle lighting ceremony where she thanked different friends and family members for their influence in her life and then invited them up to help her light a candle. As we stood and watched, my 11-year-old son looked slightly horrified at first: "Do we have to do this when we turn 16????"  When I asked him if he remembered his older brother and sister at home doing such a thing, he was relieved.

5. Then their sister called the three of them up to help her light a candle. Here's a photo of the exact moment when the profundity of it all hit me. You can imagine the blurred faces are just actually the tears in my eyes from the beauty of this moment.