Just a small glimpse into my life via snippets of dinner conversations:

1. While we were visiting our daughter at college a few weeks ago, we went out to a Mexican restaurant for dinner. As we sat at the table after my child inhaled a gigantic meal, he announced, "I'm going to have to use the lobby when we get back to the hotel."

This is a technique his father taught him in order to not stink up a hotel room bathroom. The family's reactions varied from laughing (some of the kids) to groaning (others) to simultaneously wanting to die of embarrassment while feeling happy nobody else around us really knew what he meant (me) to, I dare say,  sense of pride (my husband).

2. I am always looking up new recipes and frequently I find myself thinking, "ooh, this looks delicious. The kids are going to hate it." I made such a recipe recently and to soften the blow I picked up a supermarket rotisserie chicken to serve with it. While they did raise their eyebrows, I told them that it was actually pretty good and to give it a chance. To my complete surprise, my 11-year-old son (who is the pickiest of the eaters) announced later, "This actually isn't that bad."

That's the closest I'm going to get to a compliment out of that guy! I'll take it!

3. Speaking of food reviews from kids, this is an oldie but a goodie: another such a recipe is a vegan corn chowder with wild rice. On the second time I made it, my oldest daughter sat down and said, "Oh, this is the one that looks like vomit but tastes good, right?"

4. Just after dinner last week, the three boys and I were cleaning up the kitchen and disagreeing on who was a better freestyle rapper, me or the 11-year-old.

I said, "He just makes up ridiculous nonsense words to try to rhyme!"
He (with eyebrows raise in surprise and . . . best part . . . a huge milk moustache) replied, "YEAH! That's the best part of my freestyle rapping!"

5. A few days ago, my youngest daughter wanted to FaceTime with our far-away college student. We were about to eat dinner so I told her to wait, but she thought maybe we could have dinner together. We gave it a try. While B wasn't actually eating at the time, it was pretty fun to have her around the table with us at home through the magic of modern technology. 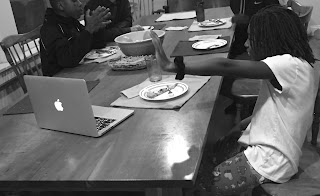