Five on Friday: Reasons I Know She's Going to be Just Fine

I've been whining a lot about sending my daughter to college this weekend. I think I get a pass on this one, it's my first time. I'm sure it's going to get easier with each kid, just like I cried when she got on the kindergarten bus but I was kind of happy and relieved when the fifth kid did.

It's not so much that I'm worried about how much I'll miss her . . . I'm sure I will, but she's gone away without me before and I'm so excited for the adventures she'll be having. Also, she and I text quite a bit and I can't see that changing (more experienced parents: please don't tell me otherwise right now, it's all I've got).

It's more the symbolic end of her childhood that's punching in the gut this week. And, as a well-meaning person pointed out the other day, "It's sort of the end of your family unit as it was."

I'm trying to remember that that's okay. Families are fluid. Kids grow, that's the whole point of this right? To raise them into successful adults?

I saw an article recently warning parents that their child might not be ready for college: just not emotionally mature enough to handle the real world. I felt comforted in the fact that I don't have any worries about my daughter in that regard.  I'm so proud of her every day; she's so very smart, creative, compassionate and amazing.

Looking back on memories from her  childhood, I realize she's always been this way and I really have nothing to worry about:

1. While other preschoolers were making mud pies, she'd wrap onion grass up in leaves and invite me to try one of her "Vegan Grab and Go Wraps."

2. When some older girls were teasing her cousin about her doll not being a real American Girl doll, my daughter defended and consoled by saying, "That's right. This one is a Canadian Girl doll."

3. When asked if she found any hermit crabs in the tide pool on vacation once, she answered: "No, but I saw a bunch of cool rocks and a lot of stories waiting to be told." 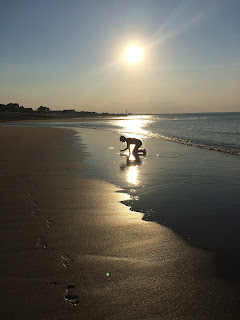 4. Some girls she was hanging out with had made up a silly song that included the lyrics: "Harriet Tubman, get on the bus! Kick the white man off!"
My daughter said, "I think you're mixing Rosa Parks and Harriet Tubman up."
They replied, "Who cares? They're both Black!"
"Well okay," she said, "then Martin Luther King and my younger brother are the same person."

5.  "Sometimes when I have a wish . . . you know, like my necklace clasp is in front and I turn it around or something. . . I just wish it to go to someone that really needs it. I know it doesn't really do anything, but it's the thought that counts."


Posted by Sister Serendip
Email ThisBlogThis!Share to TwitterShare to FacebookShare to Pinterest