Last summer I got a tattoo right next to one I already had that, somehow, unbelievably, is already twenty years old.

That was a bad idea.

I didn't know the old one was looking so blurry and faded until a bright brand-new one moved in next door.  I finally got it touched up yesterday and decided to have a little tattoo show and tell for today's list.

1. First tattoo, the star. I've always had an affinity for stars and when I found a heavy belt buckle in the shape of star at Babci's house, I claimed it for myself.

After owning it and never wearing it, I decided to get it tattooed on my arm instead. It was my first tattoo and my boyfriend at the time got a (different type of) star at the same time. We later eloped and sometimes think of those star tattoos as our engagement rings.

2. Next up, the kids! This little lady is me and one, two, three toys are my first three kids. I remember thinking at the time that if there were ever any more kids, they could just be added onto the back of the chain.

3. There were more kids! But I realized if I added them on, I wouldn't be able to see them and it never made sense to me to have a tattoo where I couldn't see it. Whirlwind Z got added on as a pinwheel and then little sister A came to us. She then went back to biological family for a bit before returning to us. We weren't sure if she'd end up staying or not but knew she's always be in our lives so she got added on as a bouncy ball.

5. Lastly, ye olde star tattoo has been cleaned up and has had some color added. I'm super happy with it! Thanks Dutch! 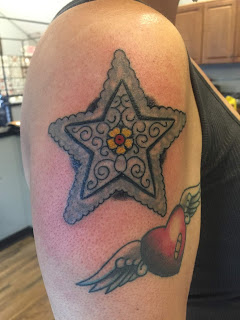