Right after I was raped, I told pretty much everyone what happened to me. There were times it was appropriate, like when I stood up in front of one of my larger college classes and circulated the police sketch of the rapist and asked my classmates to please not hesitate to call 911 if they thought they saw him. Other times it was downright weird, like sharing that info at bars with guys who were trying to hook up with me (not that it necessarily stopped their pursuits. Even weirder? Maybe.)

Clearly sharing was beneficial to me, because I kept doing it and emerged relatively unscathed. As years passed and I settled down and became a mother, I found I had a new set of local friends. At that point I finally had a bit of a filter and knew it’d be strange to blurt it out at the playground while we supervised our kids playing. Also, as a parent I knew how difficult it is to finish a conversation even about the most mundane things when you are constantly being called away to break up a fight or kiss a boo-boo. I just didn’t think I could throw in there, “Hey I was raped in college, but I’m okay now! SNACK TIME!”

I hated that they didn't know though. First of all some of these new friends were becoming people I cared about deeply and I wanted to share my story with them; it seemed like denying my truth not to bring it up.  I wanted to be a face behind the statistics for them. I never wanted to be “rape victim,” I wanted to be Gina, survivor. Personally, I had never believed the statistics about how many women are sexually assaulted until I began sharing my story and then suddenly women felt free to share theirs with me. Putting faces to statistics for any cause is so important for garnering compassion, spreading awareness, implementing change.

Additionally, I never wanted to be a part of keeping silent about rape and abuse. I felt that doing so would be potentially contributing to the feelings of shame that any survivor might have surrounding it. Eventually I did find ways to share with the ones I became close to. To my surprise and disgust, so many of them would in turn reveal to me that they were survivors as well.

Because I never wanted to hide it, I thought my children would grow up knowing this about me. I wasn’t denying or ashamed. But then these little fairy-flung creatures came to me, amazed at the magic of the world and firmly believing that “bad guys” were purely fictional. I couldn’t shatter that innocence. So we took it in baby steps. First I made sure they knew that they were the bosses of their own bodies. Period. Don’t want to kiss a relative? It’s your body. Smile and be polite but your body is YOURS. We worked up to “and one time when Mommy was in college someone touched my body in a way I didn’t want them to.” My oldest, maybe four years old at the time, asked, “So did you tell the teacher?” Sweet baby. “Well, sort of. And the police.” She was cool with that.

Several years later my friend Catherine Lent, a very talented local artist, taught a henna class that I attended. I brought home some henna to practice my own designs. My oldest, at that point ten years old, made a heart with wings on my palm for me. A few days later I was in New York City with my mom and sisters when one of my sisters pushed me into a palm reader’s chair.  The palm reader looked at my decorated hand and then into my eyes and said, “You need to write.”

I emailed Catherine to tell her about getting my palm read through the henna and she wanted to know what I might write about. I told her that I’d done a lot of writing about surviving rape. Then Catherine became yet another friend of mine to hear my story and then share her own molestation survival story. There was that nasty statistic, proving itself true again. We began a pretty in-depth email discussion about it and eventually she asked me, “Do you remember the t-shirts from the ‘I had an abortion’ awareness campaign? I thought those were great...not that you necessarily want an ‘I was raped’ shirt, but the open frankness does SO much for waking people up...odd how much we assume is and is not true about the masses around us. Though I do think a lot about kids in that situation...like you said, a child might ask ‘what's it mean to be raped?’ and maybe not everyone needs that conversation today.... if we were in an 18-and-older universe, I would totally be down with wearing a ‘my uncle molested me’ shirt...just so all those other kids wouldn't feel so alone!”

As a matter of fact, I had the exact same thought! I had longed for some kind of symbol, the way a pink ribbon and the word “survivor” is widely understood to mean the wearer fought breast cancer.  If there was a symbol on a shirt and “I’m one in four"* (or 3 or 6, see asterisks below) or “Survivor,” then adults would know what it meant and not the kids.   But what could it be? The next morning I lay in bed thinking about it and looked at the flying heart on my palm. A heart with wings…a heart that can be free to live and love again. A heart that can soar in spite of previous injury…that could be symbolized with a bandage…the injury still there, perpetually healing.

Some survivors don’t want to share with the world the way I do.  Of course they absolutely have the right to keep it to themselves. Some of them might be interested in wearing the symbol without any words. Allies could wear the same, just the symbol, or with the word “supporter.” Another idea is that there could be a soaring heart without the bandage for those situations.

I realized there could even be shirts for children and babies with “I’m the boss of my own body” written on them to serve as a reminder to the adults in their lives that the time to start teaching them is when they are young. Let’s teach them that they get to make the calls about how and when their bodies are touched. Let’s stop forcing them to hug or kiss people they don’t want to. Let’s stop tickling when they say, “stop.” Let’s teach them to treat other people that way, too, NOT touching others if they say no, and respecting others enough to ask before they touch.

My hope, whether through the use of this symbol or not, is to some day eradicate sexual abuse in every form. This can’t happen by wringing our hands and wishing it wasn’t so. My hope is that by talking about abuse and assault, we can normalize the conversation so that any associated shame surrounding it is taken away. By talking about it, we can all realize the statistics aren’t inflated and that we do need to continue to educate our children and ourselves.

By teaching our daughters and our sons about personal boundaries and by respecting those boundaries ourselves, we can lessen the chances of them being abused or abusing. My ultimate wish is that one day, there won’t be a need for this symbol at all. 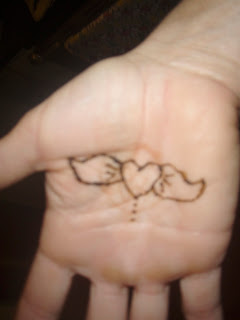