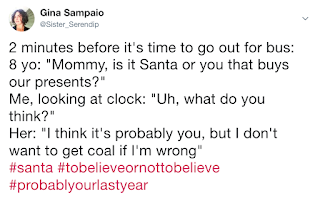 So that happened early last week, followed by several days in a row of her bringing up Santa and saying she thought it was probably just me that got the presents. I managed to avoid answering but each time I was growing more uncomfortable about it. While perpetuating the Santa myth is always lying, technically, it doesn't feel like lying when they're very young.

While I would have liked to have one last Christmas with her believing, I couldn't do it anymore when she flat out said, "I don't believe in Santa." Daddy-O and I brought her into bed to snuggle and I told her that she was very smart for figuring things out.

"I was just kidding!"

I swear my heart skipped a beat. Did I really mess up here? But the more we talked the more I realized she just sort of surprised and said that while grasping at straws. Likewise, she groaned, "You mean we just waste all that food we put in the yard for the reindeer???" We assured her all the non-flying deer enjoy it just as much.

After the initial shock, I think she realized that she likes being one of the big kids. We stressed how important it is for her to keep the magic alive for other kids, younger than her and even some older than her. That when they're ready to find out they should learn snuggled up with grown-ups they love, like she did, not from a kid on the bus. (She took a minute and asked, "Do the boys (big brothers) know?")

As for me, it's not as bittersweet as I thought it'd be. Sure, I don't get to threaten with "Santa's watching you" anymore, but that was always kind of creepy anyway. The truth about being truthful about Santa is that, in many ways, it's actually a relief. No more having to come up with stories on the fly! Over the years I have come up with some pretty good ones, though, that I'm going to share for this week's list:

1. What is this package at the door? I don't know, Daddy had to order something for work. I'm going to leave it on the porch and he can put it in his car later.

2. Why do we have to donate to toys to less fortunate kids if there's Santa? Well, many kids aren't lucky enough to have stable housing and might have to move around a lot or stay in shelters sometimes. Sometimes Santa can't find them so we help.

3. Why can't Santa bring us all the expensive electronics we want? You've seen Santa's workshop in movies and books . . . he really specializes in toys, not electronics. He has to pay for those things like everyone else, and those things are expensive!

4. Why didn't the baby get as many presents from Santa as we did? Oh I didn't tell you? When you sent your notes to Santa, I stuck one in, too. I told him that we already have so many things for the baby to play with that he could give some extras to other babies.

5. How will we return this broken item/wrong size toy to the North Pole? Santa's worked out a deal with the local stores, he delivered some extras there for just this kind of situation.

And now one more that's specific to my family but I think will be enjoyed by many:

Will you tell me a (Great Grandma) Babci story? Absolutely. Did I ever tell you about the time she and her gang stole some dolls from a department store?

And I'd tell them the story about how she convinced her gang of girls, all as tough and poor as she was, to walk three miles to Bamberger's to each steal a doll. Eventually they got caught and had to give the dolls back. That's why Babci always kept dolls on her bed when she was an old lady.

But now that the truth is out I can tell them the entire story: how Babci was the mastermind of this entire heist, working out every important detail, including how they'd explain their new acquisitions.

"If your immigrant parents ask where the dolls came from, say Santy Claus," she instructed them. "They don't understand how that whole thing works. But Mr. McGoblin, the playground monitor, he's an American. He'd never believe a story like that. So you can't take the dolls to the playground."

One of the girls couldn't resist and, as predicted, was busted. She squealed on the others and they all had to bring their dolls to McGoblin. Someone from the Elks club came to retrieve the dolls and return them to Bamberger's.

Her crime shed light on the fact that the children where she lived didn't get toys at Christmas.  After that the Elks club would bring them some every year.

So, kids, every time we donate toys to kids that are less fortunate than you, I want you to remember this amazing story about your awesome Great Grandma: 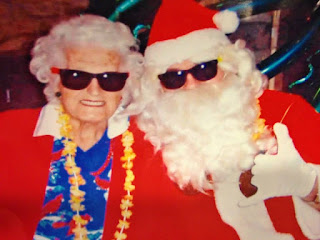