Five on Friday: The Bickering is Ridiculous

A few years ago, just when I had thought that maybe my kids were freaks of nature that all got along really well, my youngest two children discovered bickering.

Oh how I rue that day.

They're now ages 8 and 10 and still pretty bad with it . . . and so is my reaction. I try to ignore them but it really gets under my skin. As soon as I hear the first little argument of the day, it's as if I've already been listening to it for hours (maybe because I had been, the day before.)

Lately they're really upping the ante, starting to argue about the most ridiculous things ever. Five recent examples that I'm sure will be hysterical some day:

1.  THE TOOTHBRUSH INCIDENT: His toothbrush fell. Nobody saw it happen. They decided to fight about it. Names were called, tears were cried.

2. TABLE TAPPING: She was doing a little game at the breakfast table that involved clapping and then tapping the table. He despised it and told her to stop. I've been trying to teach him about choosing his battles but I agreed with him on this because I didn't want any drinks to be accidentally knocked over. I asked her to go in another room to do it. Victorious, he began tapping the table himself. Teachable moment! Let's learn the word hypocrisy, son! That did not go over well.

3. TAKING A SEAT: Some of you may remember that we have a stupidly big van, Overkill Jones, that's mainly for our epic summer road trips and driving a slew of local kids to the lake. 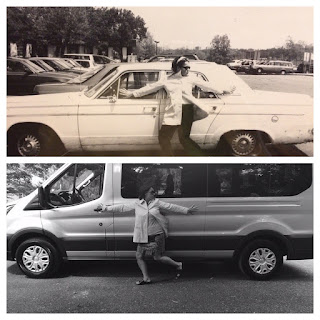 Now that our oldest daughter has a license and is frequently driving our other normal-human sized car, John Stamos, I'm using OKJ a lot more. Twice recently I've had ONLY my youngest two in the van and they've argued over seats.

It is a fifteen-passenger van.

4.  TALKING TO ONE'S SELF: On Wednesday I experienced what can only be explained as a Fourth of July miracle: they decided to play on the deck together making slime. Soon enough, though, she came in asking me if she was allowed to talk to herself, because her brother said she couldn't. He shouted from the deck, "SHE'S BEEN DOING IT FOR LIKE TEN MINUTES. IT'S SO ANNOYING" So that was the end of that.

5. TAKING TURNS: Yesterday they were talking about how they'd spend their screen time. At first they argued over who'd play on what, which was a problem (surprise!) because they both wanted the iPad. We talked through solutions and decided on splitting it up with a timer set. Naturally a new argument was started, over who would get to use the iPad . . . SECOND. Not first. Second.

"Are you really arguing over who gets to use it SECOND?," I asked my daughter, adding, "You realize this is why I'm insane, right???"

She looked at my very seriously and nodded yes.