Five on Friday: BALLS OF POWER

For this week’s Five on Friday, I’m going to do something totally new: a recipe along with some facts (some helpful, some quirky) about a favorite snack around here, especially in the summer.

1. THE NAME: Power Balls. We are in the stage where everything “balls” is uproariously funny but for some reason it hasn’t occurred to them to laugh at this yet. I think they’re too used to hearing it, so they don’t hear the “balls” in the name. Like how my friend when he was younger had no idea there were carrots in Carrot Cake. I imagine this bliss will be short-lived, though, and we’ll need a new name soon. I'm thinking "Balls of Power" to up the ante on hysterics around here.

2. WHY THEY ARE GREAT, PART ONE: They have a sprinkling of mini chocolate chips in them so the kids think they are a special dessert-like treat. But every other single ingredient is something good for them so WHO WINS NOW, KIDS? Oh right. You do. Again. You're welcome.

3. WHY THEY ARE GREAT PART TWO: They pack a protein punch, which isn't always easy for me to get into my kids when we're on the go and one of them "likes cheese but only melted" and fun things like that.

4. BUT THE BEST THING ABOUT THEM: Let’s say you packed ten power balls for an outing so each kid gets two. But then you realize you’d like a little snack and they look so yummy but if you eat one someone else wont’ have the same as everyone else and that's not faaaaaaiiiir. Not a problem with these soft little guys! Just pinch, pinch, pinch, pinch, pinch a little bit from each one and make your own little snack. The ones you pinched from can be rolled back into shape and the children will be none the wiser. MWAH HA HA HA HA!! Mom wins this one, kids! 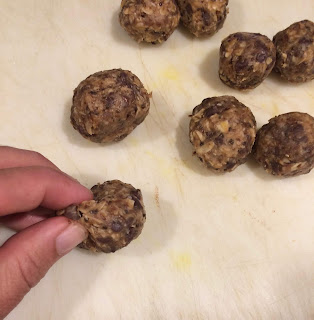 5. THE RECIPE: Yes, they’re made with peanut butter. No, I have never tried using another kind of nut butter but I imagine it could also work. Yes, I always double this (and every) recipe. Yes, I have a tip for rolling them: wet your hands when it gets too sticky. Yes, I have a tip for packaging them: put them right into snack containers filled with the number of children you usually dole snacks out to times two. Place in fridge, grab one on the way out the door. Et Voila.

Modified from a recipe found on http://www.pbs.org

1. Put all of the ingredients in the food processor and blend until well mixed
(also possible with bowl and spoon)

2. With clean, wet hands, roll into 1.5 inch balls
(you may need to wash/wet your hands again half way through)

3. Refrigerate for 30 minutes. Keep in fridge for up to a week if they last that long.