I've got lots of lists of three or four things waiting in the queue for completion and their shot at glory as a bona fide Five on Friday list. Alas, they will have to wait a little longer. As I scrounged my brain for what this week's list could be, I realized there has been a lot going on that has made me smile lately. Like:

1. Chicken masks. Why are so chickens so funny? I don't know, but I will totally try on that mask. 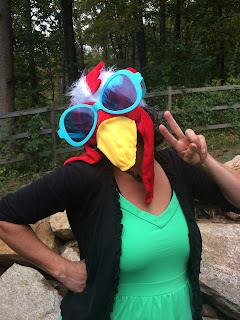 2. My 9-year-old Z, who is always everybody's best Right Hand Man . . . came home with a certificate from school saying he was a great helper. He shrugged as he handed it to me, saying, "I don't know even know what I did!"

3. One morning I overheard 11-year-old E say, "Cool it" to his brother so naturally that prompted me to start playing (and singing and dancing along to) the New Edition song, Cool It Now. E rolled his eyes at me, saying, "Why do you only like the oldies?"

4. My artistic teenage daughter has gotten her hands on some cones of henna! My arms are never boring these days. These were last week's designs . . . 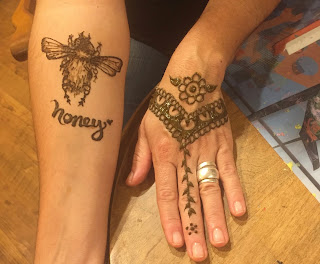 Doesn't know who has the crush, huh? Totally believable.

Hope you've had a lot to smile about lately, too, and that you got a few more from this week's list.