Five on Friday: Teenage Babysitters for the Win

If you've been reading along, you know that this is the first summer I'm trying to juggle five children home from school and a part-time job. Even though my teenagers are perfectly capable of babysitting the younger three kids at times, I didn't want to leave them in charge for ten hours a week. There's way too much sibling bickering for them to have to deal with. Luckily I have lots of family locally that are willing and able to take care of the little three (see last week's updates on Grandmas Camp they've been enjoying)

This past week my adopted kids' biological sister has been staying with us. I thought the addition of one more teenager--one exciting teenager that all the kids want to play with--would change the dynamics at home and that it might be okay to leave the kids home alone while I was at work.

I was right. These kids had a BLAST without me home. Here are the top five hits of having the teenagers in charge:

1. Cooking challenge! They had about three of them and sent me pictures of all sorts of really good looking dishes they made (and even saved me some.) I love seeing kids active in the kitchen but honestly, I often forget to include them in cooking.

2. THEY CLEANED THE KITCHEN WHEN THEY WERE DONE. The garbage was even taken out. I could swoon.

3.They took sidewalk chalk drawing to a whole new level: 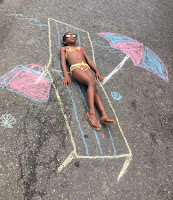 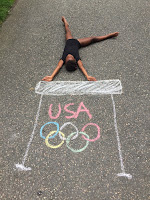 4. There was a little vomit the first morning from my youngest--which of course I'm not thrilled about--but I've got to say, the teens handled it extremely well. (Turns out to maybe have just been a case of a little girl sucking down too much snot, not actually sick.)

5. But the very, very best about leaving the teens in charge this week was that my children got to bond one-on-one with the older sister they adore and don't get to see enough without any pesky meddling adults to get in the way.
Posted by Sister Serendip
Email ThisBlogThis!Share to TwitterShare to FacebookShare to Pinterest
Labels: adoption, Five on Friday, parenting, summer