Five of Friday: Best Things the Kids Are Thankful for (So Far)

Every November we make a big featherless paper turkey and for some unknown reason the kids give him a food name (Cheeseburger or Bacon, for example. This year it's named Waffle. My youngest wanted to name it "Frozen" after the movie and I thought "Frozen Turkey" was funny but we were voted down.)

We also cut out paper feathers and leave them with some pens in the dining room. After dinner, we write things we're thankful for and then stick the feathers to the turkey.

Waffle is looking nice and full already even though we still have two weeks until Thanksgiving. My favorite feathers so far are:

2. Every one my youngest has dictated for someone else to write for her. She starts off each one with, "I'm thank you for . . ."

3. The other night we were playing a really silly game at the dinner table with lots of giggling. I finished eating so quietly began writing on my feather and then B and then Daddy-O did the same. A minute later we realized we all wrote pretty much the same thing:


4.  He may or may not be talking about me, but I like this one that Daddy-O wrote either way.

5. Last night after dinner Z asked if we could write on our feathers but there was only one left. I didn't feel like cutting more right then so I suggested a group effort and we came up with this: 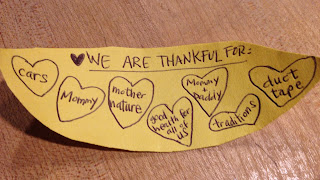