Five on Friday: My New Group of "Friends"

Last month when I was telling you about what a big month it had been for a local history nerd like myself,  I mentioned that I had been becoming more involved with a non-profit volunteer group that meets socially once a month and supports a local historic site. I wrote that, in this group:

I adore being in this group and not just because I'm the youngest by decades (or maybe because I do like it, in the sense that I really value intergenerational friendships . . . but I digress) and plan on sharing more about my experiences with them in an upcoming post.

So, here's that post!
1. I used to work at the historic site that this group supports, so that's how I got my first invitation to their meetings. At one point I volunteered to drive a bunch of them in Overkill Jones, our 15-passenger van, on a museum field trip.
It was my understanding that this museum was about an hour away . . . the first hour of chatting passed by swiftly. But it was closer to two hours away and at one point there was a lull in the conversation.
My co-pilot in the passenger seat, a 76-year-old woman, broke the silence by asking, "Want to hear a funny story about a vibrator?"
My back-seat driver, directly behind us with a voice like one of Marge Simpson's sisters, deadpanned, "No."
(To which I replied, "Speak for yourself!" and then I got to hear the story.)
2. Time passed, I switched jobs, the pandemic started . . . I hadn't seen this fun group of women in ages. When they had their first in-person (outdoor) meeting again in August, I attended and was reminded of just how fantastic they are. Vibrator Story* announced that she really needed help with emails, so I decided I'd become a proper member and do just that. They almost didn't let me, but then . . . well, I'll just recap the email conversations below:
Me: I heard Vibrator Story say she needs help with email. I'm going to become a member and help her.
Chairperson: That'd be great, send your $20 in.
Me: Will do.
***
Me: Hey, I became a real member and I'm going to help you with the emails!
Vibrator Story: Oh, no, you can't.
Me: What?
Vibrator Story: No, no, I couldn't do that to you. It's entirely too much work.
Me: Um . . . what is it, like one email a month? I assure you I can handle it.
(No response until an email out to the board of this group with me added in)
Vibrator Story: Great news, everyone! Gina is taking over for me and is now a member of the board!
(I am??!! That means two meetings a month! I didn't realize what I was signing up for but okay!)
3. So here comes the first meeting that I'm going to be sending the email about. I've already sent one email about membership and blew their minds by adding photos and graphics. I looked at the list of 115 email addresses and thought to myself: now I'm really going to dazzle them . . . I'm going to introduce them to BCC.
Well. That backfired.
This meeting was going to be a local field trip (actually to the museum I currently work at, followed by lunch at a nearby restaurant).  Some of them do not drive. Many of them like to ride together even if they do drive. None of them is familiar with BCC. So I happily sent the email and then the responses started rolling in:
Shannon, will you drive me?
Kathy, I can pick you up if you want.
Marcy, I'm going to ride with Penny but I can ask if she has room for you.
Et cetera, et cetera. But BCC meant those responses only came to me so then I spent the better part of an hour untangling that mess. Lesson learned: sometimes BCC is not better.
4. All board/meetings have the potential to be derailed by some chatty members going off-topic. This board is no different but has the added risk of this happening by virtue of the fact that it's a group of older women who aren't as social as they used to be because of the pandemic. A recent meeting was just getting to that point of me wondering just how long it was going to last when suddenly they ALL STARTED GETTING UP TO LEAVE. No slow wrap-up, no good-byes, they literally just all stood up and began walking out the door.
The host was cleaning up the coffee and I asked her what just happened.
"Oh, we have a lunch meeting at 11:30."
(A lunch meeting. At 11:30. For a different group that they're all in.)
5. Last month's regular meeting featured a speaker teaching us about flax production. Vibrator Story, who is now nearing 80 years of age and still the source of the best stories in this group, shared her experiences in using a spinning wheel back when her kids were younger.
"The thing about using a spinning wheel is that you have to be very relaxed. I was learning with my girlfriends and all the kids were running around and it was very hard to relax. I recommend a glass of Harvey's Bristol Cream first, it really makes the spinning much easier." 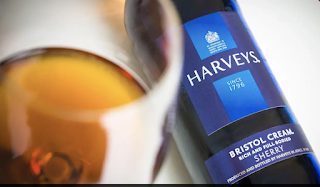 Essentially, I learn so much from these women all the time . . . oh wait! I say women but actually there is one man who regularly attends. He missed the field trip to my museum so came on his own recently . . . on his motorcycle. I showed him some pictures of Giacomo and he recommended a memoir about a woman who rode her motorcycle around the world to me to read. I picked it up and I'm really enjoying it! 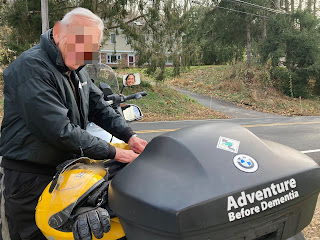 I mean . . . you see it, right? You see the value of intergenerational friendships and how this group in particular is an amazing group of folks?
Officially, they're one of these "Friends of a Non-Profit" group. Personally, I count myself damn lucky to say that they are also friends of mine.