Five on Friday: Lessons Learned from Our End-of-Vacation Misadventure

A few weeks ago, we met someone who asked about our vacation plans. When I told her we'd "only" be going to Cape Cod and the Berkshires, she remarked that that sounded like a perfectly nice vacation! I didn't mean to sound ungrateful, I had just forgotten that she didn't know that our family usually likes to take epic road trips in the summer and this one, to me, sort of paled in comparison.

We actually did very much look forward to traveling to these two very lovely locations with the added bonus that we'd be able to spend time with extended family members on both legs of our journey. I was sure we'd have so much fun swimming, looking for hermit crabs, hiking, kayaking, rafting . . . but I didn't account for the weather.

We had fun but countless card games and movies just aren't the sort of summer adventures we're accustomed to. It would be a very calm vacation . . . until the very last hours, literally on our way home, when a grand misadventure occurred.

A few of the kids complained about how awful it was that we nearly ran out of gas and ended up with one problem after another in trying to attain more . . . but I'm here to tell you that not only was it not really terrible at all, there was some valuable lessons to be learned!

1. Technology is an awesome tool. On our very last jaunt, a little morning walk across the Bridge of Flowers before hitting the road, we used an app to identify interesting flowers. Then we used another app to get our directions home. The digital gauge in the van let us know how many miles we could go on the remaining tank of gas and another app let us know where we could find a station to get more.

2. Technology is not always 100% reliable. With 4 miles left on our tank of gas, the app brought us here:

3. We don't have to keep lamenting the fact that mistakes that were made. Yup, kids, we all know we should have stopped earlier or filled up the day before. Nobody's debating that. You've all commented and we can't change the past so we're going to stop now and focus on solving the problem.

4. It's never too late for road trip Combos! Normally a road trip staple, we hadn't gotten any Combos yet. Once we found ourselves sitting around for a couple of hours at a convenience store, it seemed the perfect time for a traditional road trip lunch of Combos, Slim Jims, cheese sticks and a few random veggies Mom had in the cooler bag. 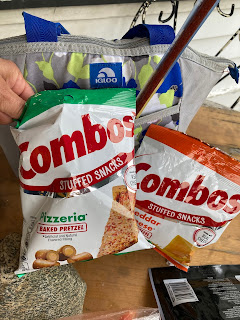 5. The kindness of strangers still exists and paying it forward is a real thing. This turned out to be a more complicated story than not having enough fuel to make it to a functioning pump. We learned that our van needs a specialized funnel to pour gas into it and also discovered that our van was missing said funnel. We also put a call into AAA that apparently wasn't properly initiated (when I called later to cancel it, they had no record of the request. Awesome!).

Two different people that saw us when they had stopped at the store came back with gas from home. When another Ford (finally!) pulled up, the driver was kind enough to let us look in his trunk for the funnel, which he had and lent us. The woman who let us use the entire contents of her gas can refused reimbursement, so my husband went into the store and gave the cashier some money to use on a future customer in need.

It might not have been the ride we expected but it did add some excitement to an otherwise sleepy sort of trip. Ultimately, we stayed calm, safe, together, had friendly interactions with locals and managed to solve the problem.

My 15-year-old says he doesn't want to go on any more adventures for at least a month! Son, you can try to avoid adventure all you want but sometimes, in our family maybe more than others, it finds you anyway.