Five on Friday: Donating Blood in the Time of COVID

Observations from my recent donation:

1. I’ve read a little about the recommendation of double masking when out in public. I think it’s a fine idea but I never spend an extended amount of time indoors close to people so I haven’t done it.

As I was waiting to check-in at the blood drive, I had a mini freakout, thinking “okay yeah, maybe hanging out with phlebotomists who travel around and spend time close to and touching lots of strangers would be an instance I should have considered double masking!” It passed quickly, because I’m not good at maintaining that sort of freakout (thankfully) and it was such a warm day yesterday, they had the door wide open and I could feel the fresh air coming in. Don’t tell me any science that would prove that wasn’t enough to help, it made me feel better.

2. Upon check-in, I sat at the touchscreen to answer the same questions they always ask. When a new one flashed up on the screen and I saw it but didn’t really process the words yet, I thought maybe it said “Does your nephew have hepatitis?” and I thought that was oddly specific and then I realized that it of course didn't say that. Then I was giggling out loud which is fine because they don’t ask you any questions about your mental health when you donate blood.

3.  I’m not at all sick, but I did have to clear my throat. If everyone wasn't so tense about COVID, I'd have just done it. I tried to just do it a little bit which of course didn’t work and so instead of just having one satisfying throat clearing, I had to do about ten little attempts at stealthy throat clearings under my single layer mask, none of which got the job done. Ugh, now I have to clear my throat again just thinking about it.

4. While I was laying there, I realized the music they had was this something-something-greatest Motown hits album I used to have—pretty sure on cassette (!!). I was having a great time singing along to all the songs (yes, of course out loud. Quietly but out loud. Please refer to the end of #2)

(Though I did think it was rather unfair when September came on, how are you not supposed to get up and dance to that song??)

5. While there was a lot that was different about donating blood during a pandemic (many extra steps and precautions), some things remain the same: they still insist you have a snack before you leave and they still go completely overboard on the bandaging. 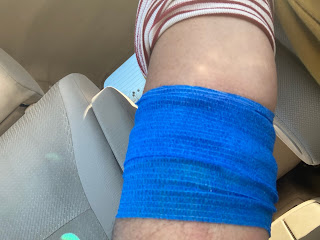