Five on Friday: Mama's Got a New Playlist

Recently I've realized how much no-longer-listened-to kid's music is still on my phone. I can be in the middle of a really good random music shuffle and suddenly one of Randy Newman's songs from the movie Cars starts playing.

It's sort of a buzzkill.

So I've started (sometimes happily, sometimes reluctantly) deleting those songs. I also decided to spend a few minutes creating some fun new playlists so that I don't have to worry about the errant random shuffle buzzkill anymore.

And because it's me, I might have had more fun coming up with ridiculous playlist titles then the lists themselves, like:

2. Road Trip Music if Those Ever Happen Again

3. Howl But Not in the Allen Ginsberg Sort Of Way

On my playlist, it is followed by songs like I Fought the Law and the Law Won, Bad Decisions, He's in the Jailhouse Now . . .

"Nice narrative," observed my teenage daughter. She regularly creates amazing playlists so I considered that a pretty high honor.

*A note about my son's song: I couldn't remember what the inspiration for writing it was. He reminded me that he used to have this tee shirt: 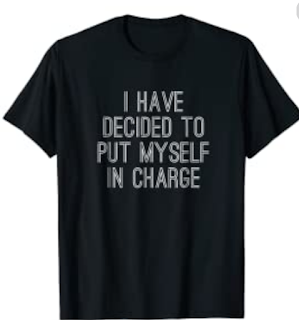 . . . and just started to sing it one day. I also forgot that the song existed at all, because I am getting older and have a terrible memory. It popped up in a random music shuffle a few weeks ago, completely delighting me . . . so even though I've got these fancy new playlists now, I think I'll still do the shuffle, too.