Didn't I just have to do a little survivor self care last week for Five on Friday? Another week under this Administration means, unsurprisingly, another week of new lows.

Plenty of other things the past two years have upset me, but the mimicking of Dr. Ford by our supposed leader struck a different sort of nerve. I didn't even turn the volume up, the headline and comments were enough to make me feel completely nauseated and defeated. I knew I'd bounce back, I'm resilient, but sometimes I need a minute.

The next morning inspiration popped up on the Motherwell Magazine Instagram page:


I remembered who the fuck I am. I am a fighter and an activist that refuses to let the bad guys win. I'm the woman that people ask to speak at last-minute vigils for sexual assault survivors and I'm the woman who fucking slays it. I had several people approach me afterwards to tell me how inspiring I was but I don't think any of them realize how inspiring it is for ME to have done it.

Here are five ways how:

1. Being asked to speak inspired me to write, and I know that writing is cathartic for me. In just over 24 hours I was able to write something I felt really good about and then didn't even need my cheat sheet when I had the mike.

2.  A little girl whom I've met a few times was there; I know her parents. She was unsure about holding a votive candle of her own. Ultimately she declined but when other candles were lit she looked like she may have had some regrets. When it was almost my turn to speak, I asked her if she'd like to hold my candle for me. She said yes so I handed it to her and then walked up to the microphone. I was surprised when I realized she had followed me. She stood next to me the entire time. Mini-activists inspire me. 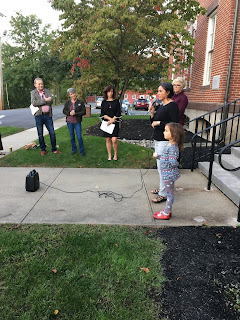 3. Last week I realized that soon it would be the 20th anniversary of Matthew Shephard's death. I wanted to try to organize something but . . . just hadn't. This experience reminded me how easy it is to organize a vigil and connected me to a fellow activist that was willing to collaborate with me. Within 24 hours we secured a location, arranged for speakers, created flyers and an event page. Within 4 hours of the event being made public, the school librarian let me know that an 8th grade girl is doing a National History Day project on Matthew Shepard and would like to be involved. Interestingly, her first name is the same one that my little candle holding friend has. Young activists inspire me.

4. My parents, who have inspired and supported me my entire life, were there.

5. Most of the crowd, though, were strangers whose reactions, comments, and willingness to repeat my refrain at the end of my speech inspired me.


We can become the person that others feel safe to confide in
by practicing saying this simple phrase: I believe you.

Everyone here, I want you to know that I believe you.

And I’ll see you at the polls on November 6th

But I've seen so many videos of individuals and crowds protesting since Wednesday, so much vocal resistance. I'm completely re-energized by it. Change is happening and we're living through it. It's difficult and at times certainly feels demoralizing, debilitating, defeating . . . but we just need to collectively take a deep breath and remember who the fuck we are.