"To combat this, I've been trying to check in with myself to see how I'm doing. I'm going to try to make a monthly Five on Friday list to hold myself accountable to my goals . . ."

She said in a recap of January on February 2nd. That means there should have been a February recap in early March. Ha ha ha ha ha. February barely counted, it was so short! And March has just been a total wreck with back-to-back-to-back nor'easters. Really, I can hardly blame me for having trouble keeping up.

It's going to be interesting to write out what I've been doing to see if I really have been keeping up with my goals for the year or not:

1. Health: Well, I really haven't been exercising enough. I have shoveled a bit of snow and hauled a bunch of firewood. But yesterday when I didn't really feel like it, I forced myself to go out for a short jog and it was so lovely. So that counts for something.

Two out of five kids have had their teeth cleaned and soon the other three will be going. Next up: making doctor's appointments for all three spring-birthday boys.


2. Relationships: Some plans with friends were canceled because of the snow--this is a good reminder to reschedule that. Also my husband and I really need to go on a date and the stars just might align for that to happen tomorrow. (OH! But I did go to Bingo at the VFW with one of my best friends and I won $50! That was thanks to my husband who watched her kids and pushed me out the door.) 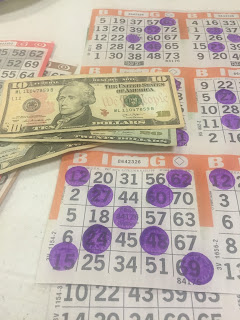 3. Self-Care: I did go for that manicure and, as expected, horrified the poor manicurist. (When her English is shaky but she can still say, "This is not good," you know your cuticles are frightening.)

I thought I was doing okay in the self-care department but I have to wonder if my two recent nightmares, both that had scenarios in which my personal safety felt threatened, are a result of how much time I've been working on the What Were You Wearing: Survivor Art Exhibit. Amazingly I was able to stop the second one, somehow told myself it was a dream and to make it stop. Maybe that's because I had been talking to the kids about lucid dreaming recently? I'm going to add "talk about lucid dreaming more" to my mental list of self-care.

4. Creativity: The art exhibit and the shows The Meta Theatre Company and I will be performing along with it.


5. Community: This is mainly going to go to the exhibit, too, right now. I also went to the Board of Education meeting the other night and will be going to the Township Committee meeting soon--both for specific purposes and I don't think I'll be going to either of those regularly, but it does feel good to be involved.