Five on Friday: No Power, No Problem

We'd been without power for about 48 hours when I figured it was time to cook up some of the food that was in the fridge before it went bad. We have a gas stove so no power is no problem for cooking. (We're also lucky enough to have a pond so we were  filling buckets with water to warm up for washing dishes.) "It's almost like you were made for this," observed my husband.

"It's all that playing house I did." I said it as a joke but I think it's at least partially true. Countless hours of my youth were spent in my backyard playhouse, crafting meals from scavenged wild onion grass and collected rain water. 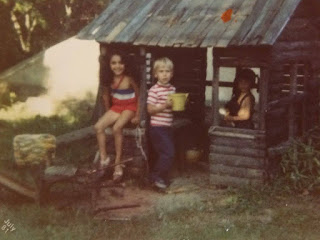 We hadn't resorted to eating wild onion grass yet but I did horrify my children by saying I think I could capture one of the bigger birds that come to our deck for birdseed and cook it if we were desperate.

Besides just being in my element this week with fire stoking and water collecting, I have to say I've actually really enjoyed not having power. I like feeling self-sufficient and spending a lot of technology-free time with my family. It wasn't terribly cold, work and school were canceled, nearby family still had power for when we needed to shower or recharge, we had firewood, water and each other (oh, Mom, you're so corny!).

Here are some of the best things about the five days without power:

1. The fireplace! Great for warmth, ambience, drying snow boots, and using that pie iron we forgot we had! The first night without power we all ate dinner on the floor by the hearth and my 11-year-old said, "If the power came back on now it would kind of ruin everything." 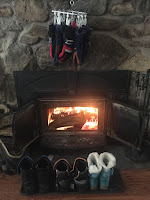 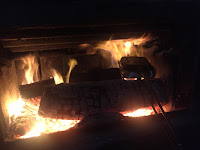 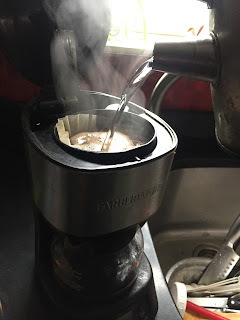 3.  Remembering one of my best parenting hacks: glow sticks! While the fireplace, candles and a big flashlight were sufficient for seeing each other and playing games at night, bedtime can be scary when there's no light coming from clocks, appliances and hallways. That's why I try to always keep glow sticks on hand, to give to the kids to take to bed when the electricity has gone out. This  go 'round they also discovered the joys of a battery-operated transistor radio that used to belong to their Pop-Pop and the glow sticks were great for in-the-dark dance parties. 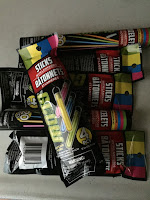 4. Chalkboard observations from my oldest son that made me laugh:

5.  We played together so much. Card games, board games, silly games. My 11-year-old may now be a Rummy 500 card shark. We had dinner with Grandma, Aunts, Uncles . . . it was really nice. We need to remember that there doesn't have to be a nor'easter for us to do these things. I may institute no-power nights in the future . . .


BONUS:  My husband may have said one of the best things he's ever said about me when he said, "She's like a funny, sexy Ma Ingalls. It's weird." That might be what I want on my gravestone. Or at least, I don't know, my resume.