I must admit, I used to just love reading about your daughter Ramona's shenanigans. It is so entertaining when other people's children are naughty. And you can't ever be mad-mad at her, she wasn't setting out to misbehave, things just always seemed to somehow get out of hand.

I've always admired your parenting style. That time you helped Ramona pack to run away by loading her bag up with roller skates and all sorts of heavy shit so she couldn't actually get anywhere? Classic. One time when I was a teenager babysitting my younger sister, she was being a pain in the ass so I called on my inner Mrs. Quimby and offered, "Why don't you run away? I'll help you pack!"

I think maybe I lost something in translation.

Anyhow, I am now the mother of five children. I have a feeling my youngest may be Ramona Incarnate. I think this may be punishment for being entertained by your earlier struggles. It seems only fair that I now share my own little Ramona's recent mischievous actions so that you, in turn, can derive some pleasure from them:

1. It all started when she was a baby. We should have known then . . . because even though she was our fifth kid, she was the first to:
a. Have a pacifier for-freaking-ever
b. Repeatedly take her (sometimes poopy) diaper off in her crib
c. Figure out how to unlock the back door and escape
d. Quickly go to the most dangerous place possible during said escape
e. Paint the dog blue
f. Apply nail polish to her eyelashes
g. Find an ancient tube of vaginal cream and use it as facial lotion
h. Have a imaginary friend to blame things on
i. Draw all over her dolls and love the creepiest ones best
. . . . You get the idea. More recently she has:

2. "Accidentally" fallen into the washing machine*

3. Missed the bus. COMING HOME FROM SCHOOL. FROM HER CLASSROOM. WHERE SHE WAS SITTING AND WAITING FOR HER BUS CALL.

4. Started a Christmas list. See, I recently found a toy on clearance that I think she'd really like so I bought it and hid it. The only problem was, she didn't even know this toy existed. I put the idea into her head and she got very excited and got a paper and pencil. Would you like to know what she put at the top of the list? Do you think it was the toy? Of course not. She wrote fake barf. Closely followed by fake poo.

5. Stealthily climbed onto the dryer to reach some out-of-reach (ha! So cute of me!) supplies and took them outside to play with while I was cooking dinner and helping her brothers with their homework. A few minutes later she came in saying she wasn't sure what happened but she had blood dripping down her leg. I wiped it off and didn't see where it was coming from so I sent her back out. She returned a few minutes later saying that she thought it was from a thorn. Her leg was again dripping with blood but this time also had strategically placed thorn stuck in it (the blood, not her actual skin). It was at this point that I began to realize she had gotten into the face paint and had taken a big bottle of fake blood outside with her. She said that big brother showed her a movie in which the man had to write a letter in blood to his mother (Son: "Um, there was nothing like that in the movie. I told you, he had to give himself medical staples but that was the worst of it.") Now we keep finding things like this around the yard: 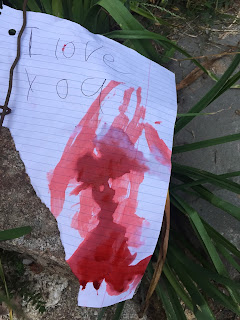 Please write back to let me know that Ramona is a functioning adult who no longer lives with you, has apologized profusely, and has a child just like her.

I'll be over here counting how many new grey hairs I have every morning and anxiously awaiting your answer.

* stay tuned for a future Five on Friday list of other things she has "accidentally" done!