What a month it's been . . . it was the anniversary of my rapist's release from prison and I was remembering how much the song Under Pressure meant to me as I worked my way through so many feelings.

Then the Presidential Election hit and the aftermath with the spike in hate crimes and my complete and utter devastation about all of it. Again, I turned to music. This time Under Pressure helped a little, but it served a different purpose.

This time, here's what has helped. Not all of them lift me up and fill me with hope, no, most of them don't this time. But sometimes just certain lyrics trigger something or even just listening to someone else sing your pain, when you're still unable to sing yourself, speaks volumes on the shared human experience and reminds me that we're not alone.

1. Genesis' That's All. This one surprised me when it came on the radio and I found myself nodding along in sad agreement with these lyrics, feeling like I could very easily apply them to feelings I've been having post-election:


2. The entire Rhythm of the Saints album. A friend told me that she has been feeling like she can't pray and can't sing and that devastates her, and me for her. When I was a teenager and listening obsessively to Paul Simon, these lines got me every time:


"Hard times? I'm used to them. The speeding planet burns. I'm used to that.
My life's so common it disappears . . .
Sometimes even music cannot substitute for tears"

I just consider that about one of the saddest things I'd ever heard. And as I listened to the album yesterday trying to figure out which song it was (It was The Cool, Cool River) I found a bunch of other lyrics that were soothing or relatable. Particularly these:

3. When I perform with The Meta Theatre Company in our original Cabaret, I had to choose a song to play between my piece on rape survival/racism/white privilege. Suggestions were made, real girl-power sort of numbers, but they never felt right. I want my response to be love, even in times of hate and especially in times of healing. So for that I chose and still turn to Tears for Fears' Sowing the Seeds of Love. Also there is a free bonus meme that goes along with this one:

4.  I read an interview with Lin-Manuel Miranda in my in-flight magazine yesterday in which he said, "(Alexander) Hamilton really made the most of his very short time on Earth . . . if I were gone tomorrow, what would the people I love say about me? What would the people who never met me say about me? Living your life based on the truth that you can't control what happens, that's very powerful. One day we'll all be gone. So what are you going to do in your life that affects that?" Honestly, did you think there wasn't going to be a Hamilton reference on this list? You just had to Wait for It
"Love doesn't discriminate
between the sinners
and the saints,
it takes and it takes and it takes
and we keep loving anyway.

We laugh and we cry
and we break
and we make our mistakes . . .

Wait for it . . .
I am the one thing in life I can control"
5. One more from Mr. Bowie. Most of the lyrics don't really apply but the title is inspirational enough. We could be bad guys or bystanders or We Could Be Heroes

(And, hey! Another free bonus meme!) 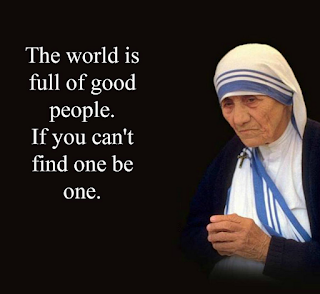 (PS I thought Sting's History Will Teach Us Nothing, although it hasn't provided any solace for me this week, deserves a nod for its title and our current state of affairs.)
Posted by Sister Serendip
Email ThisBlogThis!Share to TwitterShare to FacebookShare to Pinterest
Labels: Five on Friday