For the past 24 days, my children woke each morning filled with excitement to find out what the day’s Good Deed might be and happily completed each task with smiles on their faces and joy in their hearts. (See our Good Deed Advent Calendar here: http://grownupsmag.com/homemade-holidays/)With each passing day, their Christmas wish lists grew smaller and by the end of the month they decided instead of asking for anything at all they would just donate all of their toys to poor children!

No. That’s not what really happened.

Nor were they begrudgingly forced to participate.  Forcing them to do a good deed would make it less of an altruistic endeavor and more of task that needs to be completed, just like required volunteer hours for high school students (how can it be a measure of character if the ‘volunteer’ work is obligatory?) So instead I encouraged them but (mostly) gave them flexibility over how much they did.

The truth is they did actually look forward to opening a star each day to find out what the suggested deed was.  Most days G didn’t put much effort in, which didn’t surprise me as he not a big participator in general. The other kids mainly tried to do the good deed if they remembered.

When we bought our Christmas tree home, we found a small birds’ nest in it. I put the nest in a small dish on the kitchen mantle above where the Good Deed Advent Calendar was hanging. After we read the strip of paper for the day, we began saving them in the little nest.  Now the nest is overflowing and the branch is empty. 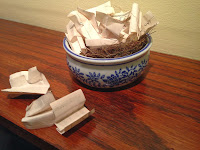 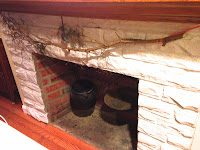 Overall it was a good experience. It fulfilled my goals of getting the children excited about counting down the days until Christmas without small toys or candies. The tasks were easy enough to complete in spite of our busy lives. It did feel good knowing we were doing little things to make other people happy in this month of busyness and rushing and “I want, I want, I want.”

Some days went better than others but all the tasks got (more or less) completed. Here’s the lowdown of how each day went:

Day 1: Call an elderly relative. They decided on Grandma (Daddy O’s mom) As Z was holding phone to his ear and it was ringing, I realized it could sound bad if he announced that he was only calling her because the advent calendar told him to so quickly said, “don’t say that’s why your calling her!” Later that night we called biological Great Grandma and talked about the Christmas tree we put up before accidentally hanging up on her. Does that still count as a good deed?

Day 2: Draw a picture for Color A Smile (http://www.colorasmile.org/). Easy enough, done after school. Mailed the next day.

Day 3: We forgot to open star in the morning, which was a shame because it was “pick up litter” and they might have had the chance to do it at school. Worked out fine though because we had to pick up the big kids at school after their club meeting and it was an unseasonably warm day so we went to the park across from the school. 11 year-old G informed me that he didn’t really like this new program. I replied by telling him to pick up the plastic straw on the ground. We found 3 soft squishy soccer balls that must have been favors from a party plus one brand new water bottle. The three little kids loved the three soccer balls—sometimes when you do something good you get rewarded right away!

Day 5: Bring neighbor’s newspaper or garbage can down: done when kids got off the bus in afternoon.

Day 6: Help get ready for our party that night. A little bit of a cop-out for me since I would have asked them for their help anyway but that was one they all participated in!

Day 8: Pick up sticks in yard. B was out at rehearsal and other kids were driving me crazy in the house (mainly E and Z who were bouncing off the walls). It was very cold but once I got them out there E and Z started kicking a ball and having fun. G, A and I picked up some sticks and then snuck inside to get the hot chocolate started.

Day 9: Do something nice for Daddy. “Yeah! We should! Because Daddy does nice things for us all the time. He brings the firewood in the truck. And . . . I forget what else he does. Oh I know! He makes my hair cool.” (5-year-old Z) So they drew him some pictures. G counted  “not catching the house on fire with my portable heat generating apparatus” as the nice thing he did for Daddy that day.

Day 10: Do/say something nice to someone that hasn’t always been nice to you. I planned for this one to happen on a school day and then it ended up being a snow day. Just as well, they spent the entire day together, sometimes fighting and sometimes getting along great—that counts, right?

Day 11: Find a way to help a teacher. Luckily school was open again so they were able to do this one. Well, three of them did anyway.

Day 12: Read a book to a younger kid. 13-year-old B: “This one’s not really fair because A can’t do this one and she’s the one that really needs to be encouraged to do good stuff.” “True…but she can pretend read to her dollies. And you haven’t participated in all the good deeds yourself, like calling an elderly relative.” “Hmm, okay.”

Day 14: Make a gift for a loved one: I had planned this for a weekend day so we’d have time to complete it but then the weekend ended up being very busy and the day got away from us. The last thing on the schedule for that day was a birthday dinner for Pop-Pop’s 80th so the kids all made special cards for him.

Day 15: Leave a baked good for a neighbor: We have a very special next -door neighbor who is like another Grandma to my lucky kids. She is also the recipient of LOTS of artwork and baked goods from us so we made sure to do it again on this day.

Day 16: Send a letter to a far away relative. 5-year-old Z wrote to his biological Great Grandma, 3-year-old A drew a picture and then dictated to B what to write. It was long and made no sense, with lots of “Happy Birthday!” wishes even though we told her that didn’t make sense. I hope her favorite Great Uncle liked it.

Day 17: Be nice to the bus driver.  The kids delivered pumpkin bread to her and tried their best to be pleasant and well behaved (a little difficult as she has very high standards for quietness on her bus)

Day 18: Put something away for someone else at home or school. Done. At school. Supposedly.

Day 20: Put something away without being asked. I think 2 of the kids did this.

Day 21: Make a card for a friend that lives far away. Only A did this and again she dictated letters that were long and nonsensical. See: Day 16.

Day 22: Do something nice for Mommy. Wait a minute—did they do this???!! This was my chance! Oh well, Daddy-O did take them all out of the house for a couple of hours and I got a bunch of stuff done plus took a run. And later took a shower. And then a nap. Fine, fine, that was all nice stuff for me.

Day 23: Read Christmas stories together as a family. This ended up being really nice. With six of us on the couch and B by our feet on the ottoman we read three books. I read one, Daddy O read one and for the third one B, G, E, Daddy O and I alternated pages. We also all sang Jingle Bells together. I think this one might have to be a new tradition for us.

Day 24: Leave cookies and milk for Santa. Clearly another cop-out for me but in my defense:

a) It was getting hard to come up with ideas
b) I didn’t want to make this too much work for them OR me, especially with all the other holiday craziness
c) Leaving cookies and milk for Santa is totally a nice thing to do.

On the morning of Christmas Eve, it was clear they were trying to break me. There was wrestling, fighting, injuries, general disagreement and discontent. There was a lot of crying, some of it by me.  Finally I said, “Come on! We’re going to make some surprise deliveries to spread some cheer!” to which E replied, “I don’t want to,” which pretty much pushed me over the edge.

When everyone else got their shoes on, he decided, “Okay, I’ll go” so we all loaded into the car with gifts for two local friends and some paper snowmen* for the local nursing home (but not without more fighting, of course.) After the first friend's house, there was still fighting and grumbling but on we went! At the nursing home, we visited with some of the residents, hung the snowmen, took some pictures and spread some cheer. We made plans to go back and make real snowman when we got more snow so the residents could look out the window and see them.

And I swear by doing this together our own little Christmas miracle happened, because when we all got back in the car everyone was in a better mood. Nobody grumped. Nobody fought over where they were sitting. Then “The 12 Days of Christmas” came on and we all started singing, even G, who also then exclaimed, “Great! What the hell am I going to do with all these golden rings and birds?”

And I laughed, because I think it’s funny when my kids curse.

And I continued smiling, because spreading cheer with my kids resulted in bringing cheer back to us. Usually the return isn't so immediate, but just like with the soccer balls on Day 3, sometimes it is. 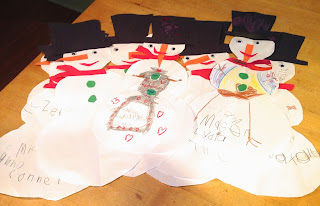 *The Friday before Christmas I was recruited to come run games at both Z’s Kindergarten and E’s 2nd Grade Holiday parties. I divided them up into teams and gave each team an undecorated snowman cut out of white paper. They also got a small Ziploc bag with a die and snowman parts in it. They took turn rolling the die and then checked the chart hanging in the front of the room to see what part their number meant (1= scarf, 2=one eye, etc.) They all seemed to like it. I liked it too because it was cheap, easy, cute and non-denominational. The kindergarteners even decorated their snowmen further with drawn on vests and flowers. The only problem was at the end there was only one snowman per five children so I decided to take them all home with me in order to donate.